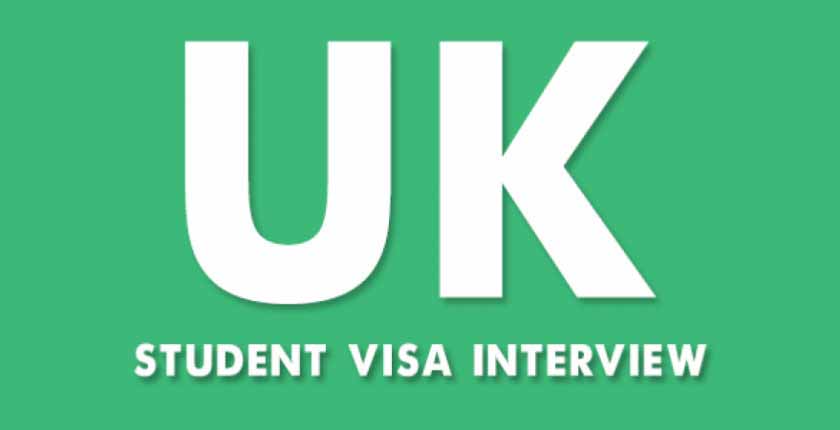 UK student visa interview questions are mainly about your institution, the course that you are going to study and how you will finance your study. Your answers will be typed up and used to assess if you are a genuine student when the decision is made on your Tier 4 student visa application. Therefore, you might be sent an email asking you to attend an interview as part of the application process. You should check your email (including the 'junk' folder) regularly as your application is likely to be refused if you are asked to attend an interview and you do not do so without providing a reasonable explanation.

Interviews take place when you attend a visa application centre to give your biometric information. A Home Office member of staff will ask you about your course, where you want to study and your reasons for studying in the UK, and how you will finance your study. Interviews are conducted in English and possibly via video link. The Entry Clearance Officer must be satisfied that you are a genuine student and that your English language ability is at the correct level, otherwise, you might be called for a further interview and/or your entry clearance application may be refused. How to prepare the questions? The following content source is from the University of Sheffield. Typical questions may include:

Q: Why did you choose The University of Sheffield?
Answer preparation: Think about why you chose the UK rather than your home country, other English-speaking country or country which other students of your nationality choose to study in. You may find it useful to refer to the university profile on our website.

Q: Why did you choose your course?
Answer preparation: There may be many courses in the same subject area as the one you plan to study at Sheffield. What is it specifically about the Sheffield course which you prefer and which suits you over other course choices? Think about your decision process. Did you apply for other courses - why did you choose Sheffield over them?

Q: How do your studies fit into your career plans?
Answer preparation: Think about what your plans are after you graduate - how will the knowledge and skills you gain from your course at Sheffield University help you with the type of work you hope to do. Does your course lead to any professional exemptions or qualifications and are these recognised in your country? Do you know what others graduating from the course you will be following went on to do eg the types of roles and organisations they work for? If the course you plan to study is at a similar academic level to previous studies, how does it represent progression and does it have a vocational focus? If this is the case, be prepared to explain this.

Q: If the costs of pursuing your course of study are higher in the UK than in your home country, why have you decided to incur the extra costs involved with studying in the UK?
Answer preparation: Think about the advantages that a degree from the UK might give you and why you and/or your family are prepared to make this investment. Have you made a realistic assessment of all the costs involved and how you plan to pay for them? These costs include the course fees and living costs, including accommodation.

Q: You have previously studied in the UK - why have you chosen to return?
Answer preparation: Think about how the new course relates to previous studies and how it might build on your previous learning. You can also talk about the benefits of your previous course. Q: You have had a long break in your studies, why are you returning to study now? Answer preparation: Think about how you explain your decision in the context of your long-term career plans.

Q: Do you plan to work in the UK?
Answer preparation: You cannot rely on funds from working to pay your course fees and living costs so you need to be aware of this. The main purpose for being in the UK is your studies, so if you do hope to work, think about how this would enhance your academic studies. You also need to demonstrate an understanding of the hours you are allowed to work and typical rates of pay.

Q: How will you fund your studies? (you should not be asked this unless you are called back for a second interview)
Answer preparation: The purpose of this question is to check that your funds are genuinely available to you for your studies. As part of your application, you will have to submit proof of your finances - ensure that you are very clear about the source and availability of these funds, also how you plan to pay for subsequent year's fees if your course is more than a year in duration. If you have official financial sponsorship make sure you are aware of the amounts and exactly what is covered. If you have a loan, how will you afford to pay this back? How much will your accommodation cost and are you clear about the cost of living in the UK? The interviewer will also be checking your ability to converse well in English, if there is any issue with hearing them clearly eg via the video link, you should ensure that you raise this so that they are aware that it is a technical issue not one of comprehension.

In addition, when you’re abroad, you won’t be limited to traveling in just the nation in which you are studying – you can see neighboring countries as well! For example, if you study in France, you’ll have the option to travel through various parts of Europe including London, Barcelona, and Rome etc.

2. Education
Another reason you might consider studying abroad is for the chance to experience different styles of education. By enrolling in a study abroad program, you’ll have the chance to see a side of your major that you may not have been exposed to at home.
You’ll find that completely immersing yourself in the education system of your host country is a great way to really experience and understand the people, its traditions, and its culture. Education is the centerpiece of any study abroad trip—it is, after all, a study abroad program—and choosing the right school is a very important factor.

3. Take in a New Culture
Many students who choose to study abroad are leaving their home for the first time. When they arrive in their new host country, they are fascinated by the distinct cultural perspectives. When you study abroad you will find incredible new foods, customs, traditions, and social atmospheres.
You will find that you have a better understanding and appreciation for the nation’s people and history. You will have the opportunity to witness a completely new way of life.

4. Hone Your Language Skills
Chances are if you’re planning on studying abroad, one of the major draws is the opportunity to study a foreign language. Studying abroad grants you the opportunity to completely immerse yourself in a new language, and there is no better way to learn than to dive right in.
In addition to the considerable language practice you will get just in day to day life, your host university will likely offer language courses to provide you with more formal education. Immerse yourself in a new culture and go beyond a purely academic experience

5. Career Opportunities
When you finish your study abroad program and return home, you will return with a new perspective on culture, language skills, a great education, and a willingness to learn. Needless to say, all of these are very attractive to future employers.
Many students find that they love their host country so much that they decide to seek work there. If you can relate, you will find that a local education will be very valuable when searching for a potential job in that country.

6. Make Lifelong Friends
One of the biggest benefits of studying abroad is the opportunity to meet new lifelong friends from different backgrounds. While studying abroad, you will attend school and live with students from your host country. This gives you the opportunity to really get to know and create lasting relationships with your fellow students.
After the study abroad program ends, make an effort stay in contact with your international friends. In addition to rewarding personal relationships, these friends can also be important networking tools later down the road.

7. Personal Development
There is nothing quite like being on your own in a foreign country. You might find that studying abroad really brings out your independent nature. Students who study abroad become explorers of their new nation and really discover the curiosity and excitement that they harbor.
A benefit to studying abroad is the opportunity to discover yourself while gaining an understanding of a different culture. Being in a new place by yourself can be overwhelming at times, and it tests your ability to adapt to diverse situations while being able to problem solve.

8. Life Experience
Why study abroad? For most students, this time may be the only opportunity they ever get to travel abroad for a long period of time. Eventually you will find a job and career, and the opportunity to study abroad may turn out to be a once in a life time opportunity.
Take this opportunity to travel the world with no commitments but to study and learn about new cultures. Studying abroad is an experience unlike any other. 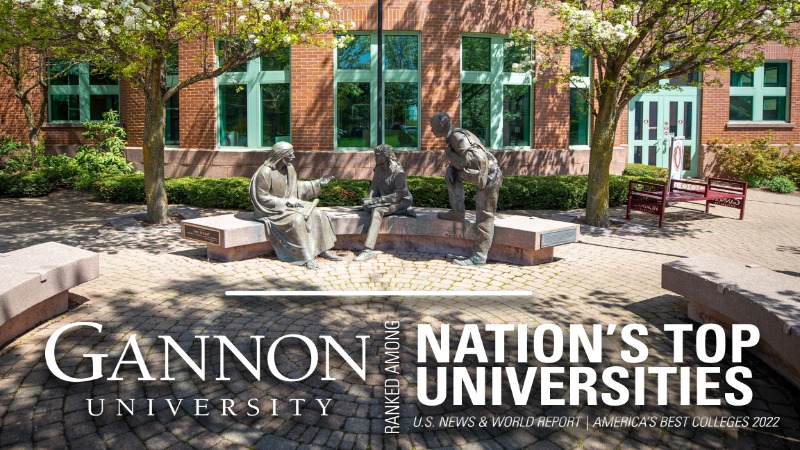 Gannon University has been ranked as a national university for the third consecutive year, according to the U.S. News & World Report’s recent release of “America’s Best Colleges.”

National universities are those that offer a full range of undergraduate majors, in addition to master’s and doctoral programs, and emphasize faculty research or award professional practice doctorates.

Gannon University has continued to grow in academic offerings at both its Erie and Ruskin, Fla. campuses since its initial recognition as a national university in Fall 2019. In the 2020-21 Fiscal Year, Gannon launched new programs that include a graduate certificate in business essentials, a writing minor, and a new partnership with UPMC Hamot that prepares students to enter Gannon’s RN to BSN program and meet the increasing demand for nurses.

Gannon also continues to offer a number of doctoral programs, many of which are offered at our growing Ruskin campus to prepare graduates to serve in the health care sector of the Florida economy. Programs include a Doctor of Nursing Practice, Occupational Therapy Doctorate, Post-Professional Occupational Therapy Doctorate, Doctor of Philosophy in Organizational Learning and Leadership, and Doctor of Physical Therapy.

For more on this year’s rankings, visit the U.S. News website at https://www.usnews.com/best-colleges/gannon-university-3266.